Sky Masters of the Space Force was an American, syndicated newspaper comic strip created on September 8, 1958 by writer Dave Wood and penciler Jack Kirby, featuring the adventures of an American astronaut.

Sky Masters of the Space Force began life as a science-fiction strip created by artist Jack Kirby and writer Dave Wood called Space Busters, which was designed to be sold to a newspaper syndicate This strip did not sell, however. 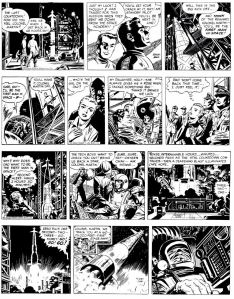 In 1958, Harry Elmlark, “an agent from the George Matthew Adams Service”, asked DC Comics editor Jack Schiff for a science-fiction comic to be adapted into strip form, to capitalize on American interest in the Space race in the wake of the previous year’s launch of Sputnik. Schiff rejected Space Busters and then either collaborated in the creation of a new strip, or simply encouraged Kirby and Wood to produce “a strip that dealt with rocket launchings, moon shots, and general story lines just a little ahead of current developments in the news.”